“Come again some other day.”  I remember looking out the window singing that lyric as a child when a summer thunderstorm kept me from playing outside. But personally I have never had to hope and pray like countless desperate folks in gulf coast Texas right now, facing more than an afternoon of inclement weather.

Before this weekend, what I usually thought of when I heard the name “Harvey” was the 1950 comedy-drama film based on a play of the same name.  Starring Jimmy Stewart as socially dysfunctional Elwood P. Dowd, the satire cleverly exposes the questionable sanity of a man whose best friend is a six-foot, three-and-a-half-inch tall invisible rabbit he calls Harvey. But from now on, Harvey will be recalled in my mind as a disturbing expression of Mother Nature’s uglier side. Powerful. Unstoppable. Destructive. A killer.

Watching news broadcasts from on scene and the Weather Channel’s live coverage is difficult. I’m sitting at my kitchen table eating lunch while thousands of people just like me are in dire peril. They are parents with small children, wading in water waist-deep. Handicapped, young and old. Children carrying small pets. But most, having lost or abandoned everything they own, carry nothing. Even from outer space, Harvey’s portrait looks monstrous. An impressive swirling cataclysm. But somehow it feels about as far away from me as it probably looks from the International Space Station snapping still shots of it some 250 miles below. And I feel dang helpless.

I think the newscasters might run out of adjectives to describe the situation if this storm continues through the week as predicted with even more rain. I’ve already heard “apocalyptic,” “epic,” and “of Biblical proportions” more than several times. Why not just call it Harvey the Monster?

This past week we’ve seen both the incredible beauty of a total solar eclipse, with crowds of onlookers gasping and applauding as a brilliant shard of diamond-like light broke out of the dark orb above, and we’ve seen tiny rain drops fall out of the same sky to accumulate in depths now counted by feet instead of inches. Both events will go into the history books. We are all part of that history, some days safe and happy. Others, not so much. When the moon got out of the sun’s way last Monday, people folded up their lawn chairs and eclipse viewing glasses and went home. But for thousands of Texans, there will be no going back home from Harvey.

I’ve seen some heart piercing photography from the flooded streets in Houston and the surrounding towns under water. I’m sharing one special shot here with you because it shows that when everything is lost, what remains is always the best, the best of each of us — love in the arms of a loved one. Even Harvey can’t take that away. So wherever you are tonight, especially if you can enjoy the blessing of a dry bed, a hot meal and clean water, grab your family, hug tightly someone you love, and don’t let go. 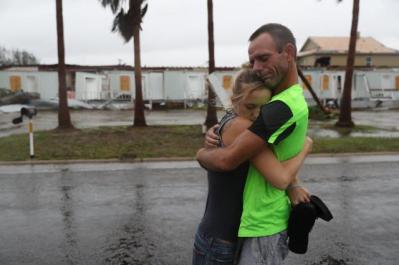