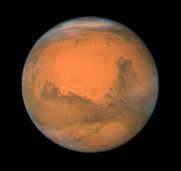 Last week on July 31, the planet Mars arrived at a place circling the sun referred to by astronomers as “opposition.” Due to different orbital speeds, every two years or so the earth passes between Mars and the sun. This means that Mars and the sun are on directly opposite sides of the earth. As a result, as when the moon is full, Mars rises as the sun sets. Consequently, the Red Planet shines extraordinarily bright. And it certainly did not disappoint.

I got out of bed at three a.m. to see it. At 35.8 million miles away, the closest it’s been since 2003, this ever-intriguing ball of desolate rock and dust was brilliant in the southern sky. From my back yard, it looked less red and more like an orange lantern set against the vast black curtain of a warm and humid midsummer’s night.

My interest in all of the planets and other objects celestial started when I was twelve. With my first refractor telescope mounted to a flimsy tripod I managed to get a good look at our moon with her gray seas and craggy craters. I squinted to identify Jupiter’s moons, too – Io, Europa, Ganymede, and Callisto – four pinpoints of light just like Galileo discovered way back in 1610. I studied every book related to astronomy I could get my hands on from the library down the street. Eventually I became an expert at identifying ancient mythical heroes and creatures traversing the heavens nightly in an endless seasonal progression of sparkling constellations. I felt as though I had reached a level of sophistication almost beyond the reach of most seventh graders. Other boys were shooting hoops in the driveway while I was inside reading about Messier’s catalog of nebulae and star clusters and the Air Force’s Project Blue Book reports of UFO sightings. So much for my involvement in neighborhood comradery. 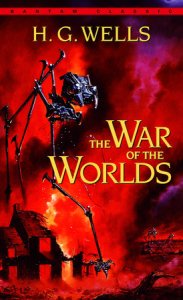 I was also fascinated with stories by H.G. Wells and Orson Welles frightening the world with their science-fiction account of a hostile Martian invasion. I wonder what they’d think of Spielberg’s 2005 sensational movie portrayal of unstoppable alien creatures intent on destroying mankind.

I’d seen drawings of what astronomer Percival Lowell in the 1890s supposed were canals on the face of the planet. Scholars explained away the canals as the product of a human tendency to see patterns where there really are none. Today, thanks to better optics and NASA’s Rovers roving, we know the canals do not and never did exist, neither as a result of natural nor intelligent extraterrestrial activity.

In a musical sense, I am always moved by Holst’s angry and ominous interpretation of the planet as “The Bringer of War,” but to be honest, I admit it competes pretty evenly with my high regard for the mystical Neptune.

I really enjoyed the History Channel’s recent docudrama Mars, chronicling the adventures of a crew of six astronauts and their journey to be the first humans to set foot there in 2033. That’s quite a twist to The War of the Worlds, unless there’s an ironic turn of events down the road we never planned on writing into the script.

I find it interesting that often in its pursuit of making us more comfortable in the universe, science has a tendency to rob us of both the enchanting mystery and innate angst surrounding it for eons. I guess that means we can all sleep somewhat better tonight in the dark security of our bedrooms and yet still dream on with some sense of wonder about the unknown. Regardless, my curiosity and amazement with the cosmos always begins and ends with the realization that “The heavens declare the glory of God; and the skies proclaim the work of His hands,” said so simply in Psalm 19:1. I think that statement puts the grandeur of creation and the greatness of the Creator in a perspective that anyone can understand, in a way better than any schoolbook or preacher’s sermon could. It definitely brings me to my knees.