Today the world marks the 70th Holocaust Remembrance Day. I was reluctant to write about this, a nightmarish subject characterized with such gravitas, the heaviness of which still haunts survivors and their families. Visitors report that like manifest evil it weighs down the very atmosphere at various sites of former concentration camps all across Europe with the ghosts of those victimized by the darkest side of what one human being is capable of doing to another. Words like atrocities and genocide fall short, are too sterile. Only documentary photos we want to turn our faces away from can convey adequately the horror and suffering endured by millions of innocent men, women and children just because they were Jews. That’s it.

They were Jews – artists, merchants, writers, doctors, farmers, craftsmen, grandparents, little school children and old folks (the list is endless) all gone up the chimneys or discarded like trash in mass graves. Six million souls who might have changed the world with their unique talents and skills, and love. But the injustice of their fate could in fact change the world, if we remember, if we say over and over, “Never Again!” But the future may be out of our hands.

The lessons of the Holocaust are obvious, but the world is not learning. Israel and Jews around the world are once again an easy target of hatred. Just weeks ago, the head of the Iranian Revolutionary Guard said that, “The destruction of Israel is non-negotiable.” Iran’s supreme leader Ali Khamenei has outlined a nine-point plan for the elimination of the Jewish State. Sadly but not unexpected, neither comment provoked a major outcry in the international community. Actually terrorist threats from Islamic militants driven by jihad put all of us infidels at the risk of imminent annihilation. So the shadow of the Master Race psyche seems alive enough to once again darken civilization as we know it.

In spite of countless efforts throughout history to destroy an entire race, let’s keep in mind that God’s chosen people are His forever. From a Biblical perspective though, things will eventually get worse before they get better. The Good Book in hundreds of prophetic verses clearly reveals that the ultimate destiny of the world is inseparable from God’s plans for Israel, that Jerusalem would become a “burdensome stone” for all the world, and that before the end, all nations will turn against Israel. “Then shall the LORD go forth, and fight against those nations . . . And the LORD shall be king over all the earth.” Zach. 14:3, 9. Judgment is coming for her enemies, and mercy for the house of David. Like it or not and believing the Bible or not, with every nightly news report and headline from the Middle East it appears that we are on the inevitable road to the final holocaust: Armageddon.

A look at the history of the holiday we call Easter reveals strange associations between the Christian faith and the seemingly unrelated practices of early pagan religions. Many Easter traditions practiced today, including colored eggs and the beloved Easter

bunny, have all evolved from pagan symbols, traditions and from myths about the ancient Babylonian goddess, Ishtar.

Goddess of romance, procreation, and war, Ishtar was also worshiped as the Sumerian goddess Inanna. An account of her descent to the Underworld and subsequent resurrection is contained in one of the oldest writings ever discovered: the Babylonian creation myth Enuma Elish and the epic story of the Mesopotamian demigod named Gilgamesh, recorded about 2,100 BC.

The most famous of the myths of Ishtar tells of her descent into the realm of the dead to rescue her young lover, a vegetation god forced to live half the year in the Underworld. When Ishtar approached the gates of the Underworld, ruled by her twin sister, the goddess of death and infertility, she was refused admission. 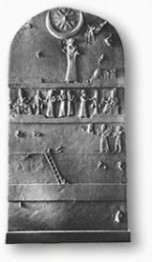 During Ishtar’s absence, the earth grew barren since all acts of procreation ceased while she was away. Ishtar threatened to break down the gates and release all of the dead to overwhelm the world and compete with the living for what food remained until she was allowed to enter and plead her case with her twin.

Easter is allegedly named for a Saxon goddess who was known by the names of Oestre or Eastre, and in Germany by the name of Ostara. She is a goddess of the dawn and the spring, and her name derives from words for dawn, the shining light arising from the east. The term estrogen also stems from her name. Also a fertility goddess, Ostara is said to bring an end to winter, with the days getting brighter and growing longer after the vernal equinox. 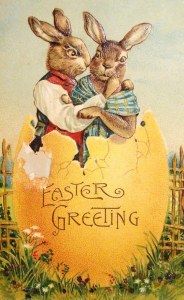 The March Hare was regarded as sacred in many ancient traditions and was associated with the moon goddesses and various deities of the hunt. Given their repute for prolific mating and reproductivity, it is understandable that the rabbit came to represent lust, sexuality, and excess in general. The Easter bunny character first appeared as a 16th-century German tradition, which said that if well-behaved children built a nest out of their caps or bonnets, they would be rewarded with colored eggs. The legend became part of our own folklore in the 18th century, when German immigrants settled in America.

In contrast, our Christian faith is founded on everything the Bible teaches about the source of life and eternal life –– on the One who conquered death through death, He who holds the keys to death and the afterlife, Jesus Christ. The apostle Paul clearly advises a young Timothy, “If you point these things out to the brothers, you will be a good minister of Christ Jesus, brought up in the truths of the faith and of the good teaching that you have followed. Have nothing to do with godless myths and old wives’ tales; rather, train yourself to be godly. For physical training is of some value, but godliness has value for all things, holding promise for both the present life and the life to come.” (1 Timothy 4:6-8)

I love jelly beans and Russell Stover’s marshmallow eggs covered in milk chocolate as much as anyone, I suppose. But knowing what we know, my family and I, at the risk of being called the Easter Grinch, might hesitate just a little to say “Happy Easter.” We prefer instead to proclaim, along with the multitude of saints gone before us, “Christ is risen!” followed by an affirming, “He is risen, indeed!”

On a day we remember as Good Friday, Jesus came to the end of His mission as savior of the world on the cross when he exclaimed, “It is finished.” The Greek translation sums up the exclamation so well in one word: tetelestai, a word used in the ancient commercial world on business documents or receipts indicating that a debt had been paid –– in full. Interestingly, the word in John’s gospel is in a tense used to describe an action that has been completed in the past with results continuing into the present. It conveys an idea that has happened and it is still in effect today. Contemporary readers of John’s record of Christ’s last moments would have understood the comparison he intended to make. The new covenant blood shed by the Lamb of God once and for all paid for that which the old covenant blood of bulls and goats could only cover up.

So far removed from the events and culture of the Bible, for most of us today the theology dealing with God’s sentence of death as the inevitable result of sin and the only acceptable recompense being the sacrifice of an innocent victim to pay the price of redemption can be difficult to grasp. That’s why many old time hymns are so much better at explaining complex spiritual realities than a hundred learned commentaries. The words for the following classic example were written in 1865 by Elvina Hall, a member of the Monument Street Methodist Church in Baltimore, Maryland.

I pray you will agree indeed that Jesus Paid It All.

I hear the Savior say,
“Thy strength indeed is small;
Child of weakness, watch and pray,
Find in Me thine all in all.”
Jesus paid it all, All to Him I owe;
Sin had left a crimson stain,
He washed it white as snow.
For nothing good have I
Whereby Thy grace to claim,
I’ll wash my garments white
In the blood of Calv’ry’s Lamb.
When from my dying bed
My ransomed soul shall rise,
“Jesus died my soul to save,”
Shall rend the vaulted skies.