Every Christmas season you can count on some variation of a nativity scene to make its annual appearance, pulled out of a storage box in the closet onto someone’s family room tabletop or a life-sized version all aglow welcoming church goers to holiday services.

Looking at “the little Lord Jesus asleep on the hay” one might not think about spiritual warfare as an aspect of an “all is calm, all is bright” Christmas. It seems incongruous — that is, until we look at the whole picture. Thirty-three years later, the long-awaited savior, “born of a virgin” (Isaiah 7:14) “in the city of Bethlehem” (Micah 5:2), had fulfilled hundreds of additional Messianic prophesies about his life, death and resurrection, the earliest being found in Genesis 3:15. God tells the serpent, who had just beguiled Adam and Eve into sin, that One is coming Who will “crush your head.” Thus the battle began. The alarm was sounded, echoing around heaven and earth and to all who revel in darkness: My Anointed is coming. Coming to rescue and reconcile, to renew what was lost and broken, an 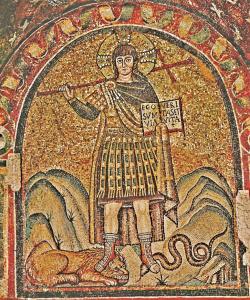 d to defeat the enemy of our souls and even death itself. Isaiah’s prophesied Prince of Peace (Isaiah 9:6) is just as much a warrior. (Isaiah 42:13)

“The reason the Son of God appeared was to destroy the works of the devil,” 1 John 3:8 reports. In plain terms then, Christmas celebrates the much anticipated arrival of God’s own Son to ransom the captives, advance His kingdom and take back what the enemy stole away. (Isaiah 61:1-3) That sounds like warfare to me. Revelation 13:8 states the Lamb of God was “slain from the foundation of the world.” Long before Adam even fell, the rescue mission was ready to roll out, “in the fullness of time.” (Galatians 4:4)

So this season, in the midst of all the bright lights and candles, carols and shopping, all the baking and decorating and gift giving, maybe we should remember that from the day of His conception, Jesus was on a seek and save, search and destroy mission on our behalf so that we might declare “thanks be to God, who gives us the victory through our Lord Jesus Christ.” (1 Corinthians 15:57)

I wish all my readers the best Spirit-filled Christmas ever. May you recognize that a foreshadowing of the cross was cast upon the manger crib at that first nativity, and that the Christmas Story is fulfilled at Calvary. But it doesn’t end there. For those who believe, the story never ends. “For God so loved the world that he gave his only begotten Son, that whoever believes on Him should not perish, but have everlasting life.” (John 3:16) One of my favorite Christmas carols is Charles Wesley’s “Hark! The Herald Angels Sing.” It includes the lyrics “God and sinners reconciled.” That’s the gospel message in a nutshell, the “Good News.” May you find comfort and joy in that realization today. MERRY CHRISTMAS!

*The artwork featured is from a 6th Century mosaic in a chapel in Ravenna, Italy, titled Christ the Warrior.

The following was originally posted at this time three years ago, but with some editing I decided to re-post because back then I think I had just a couple of readers!

Have you ever had an excessive attraction to something and had a hard time letting go? I’m not talking about hard-core stuff like drugs and alcohol. I mean like chocolate, or TV, maybe a hobby like golf. I must admit I have dealt with my share of personal abuses throughout my adult life, principally smoking for decades until finally giving it up a little more than eleven years ago in favor of a healthier lifestyle. A compulsion, however which seems to annually trigger at this time of year is my fixation upon certain amenities used to embellish gift giving during the holiday season, that being, um, well it’s . . .  wrapping paper and greeting cards.

Shocking and embarrassing, yes I admit it. No, I haven’t shared this in Aberrational Holiday Behavior Group Therapy. I don’t know if there is such a group to address this particular psychological urge. Certain family members are aware of the situation, but prefer to snicker and shake their heads. My wife, the designated intervention specialist, instinctively grabs onto my coat as we walk past the displays at the Hallmark store or SuperTarget, tugging me away from certain temptation. I mean, it’s everywhere — even at the gas station! Yes, I know that to most people, gift wrap is . . . just gift wrap.

For weeks way before Christmas the shelves are loaded up and bins are full of wrapping paper rolls. Stuffed full with different lengths, metric and standard measurements. Cheap, easily torn paper and the expensive kind with lines on the inside so you know exactly where to cut; shiny foils, and some with sparkles in the designs. So attractive, it’s blatant Christmastime eye candy. And, almost irresistible. 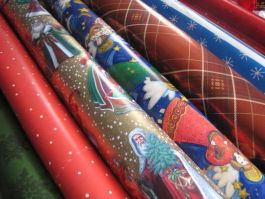 The issue is even more disturbing when I confess that we already have enough wrap on hand at home to wallpaper the entire house at least a couple of times. We have grownup wrap with designs both modern and old-fashioned. We have diagonal stripes, plaids and poinsettias and snowflakes ad infinitum. We have kid-specific wrap with Jolly Old St. Nick, wreath and  tree pattern prints in festive colors, gingerbread men, candy canes and probably even sugar plums dancing off the sheets.

Then there’s the greeting card isle. Box after box of gleaming, glittering options for expressing one’s best holiday wishes to anyone, or from anyone – even the cat. The scenes on the cards are so inviting, like the comfy home all aglow in the gently falling evening snow, lamppost decorated with ribbons and holly. A huge Christmas tree in the window, lit and adorned with treasured family ornaments. A happy snowman in the front yard, dressed up just like Frosty, and across the top, a warm-hearted message set in a fancy reflective gold metallic script.

Oh! (hand on my chest) I’m gasping, and a bit choked up, I want to be in this Thomas Kinkade fantasy. I’ll take a dozen boxes. And each box usually has 12 to 18 cards with an appropriate number of envelopes plus one, because they know you’re going to mess up on at least one address. In reality, I don’t have more than a few friends and relatives to whom I might mail such a sentimental card. That along with increasingly outrageous postage rates is probably why I haven’t sent any out for years.

I must say that I have done relatively well so far this year. I did nab a couple wrapping rol

ls at the craft store last week, my wife not being on hand for restraint. They were 60% off. Who could resist? Just need to get through the next few days, then we can pack up the unused hoard and forget about it until next October, when holiday decor gradually begins to emerge restocked in the retail world and we can start all over again!

PS: There is a problematic issue with Christmas candies and cookies too, but that’s a story for some other time.