Seems as though most of my memories
of John F. Kennedy are archived in
grainy black and white.

The televised campaign debates with a
sweaty Dick Nixon, who looked like
a stiff cardboard prop in the shadow
of the bigger than LIFE magazine
war hero bred for achievement by
Massachusetts’ premier political family. 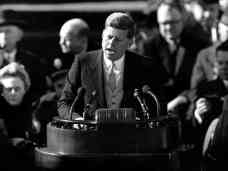 The bright but bitterly cold inaugural
on the steps of the Capitol, frozen under
a nor’easter snowstorm’s fresh blanket
of dazzling white, a distinctive
backdrop for a fledgling president’s epic
“And so, my fellow Americans, ask not”
speech, challenging us in a valiant
call to arms against tyranny, poverty,
disease and even war itself.

The televised series of White House
tours graciously hosted by a sophisticated,
shyly soft-spoken Jackie who assured us
that it was just as much “our house.”

The candid photos of handsome toddler
John John playing hide-and-seek
under the desk of the most powerful
man on earth.

The who’s-going-to-flinch-first live TV broadcast
to an on-the-edge-of-our-seats audience by a
stern and deadly serious JFK demanding that a
raging Russian remove his nuclear missiles
from Cuba – or else. We held our national breath,
praying, all eyes fixed on the doomsday clock.

And then came that day in Dallas.
It started out with smiles and waves
– and color.

Like heaven’s giant spotlight suspended
in a flawless azure big-as-Texas sky,
a beaming golden noontime sun illuminates
a cheering crowd at Love Field,
all reaching out for a once in a lifetime
touch from the chief executive’s hand.
The First Lady, wearing that now iconic
strawberry pink and navy trim
Chanel wool suit and matching hat,
cradles so tenderly an ill-fated bouquet
of red roses, too soon abandoned on a
blood spattered seat of the presidential
Lincoln Continental where the life of
Camelot’s king was lost and everything
suddenly faded back to black and white
again. For a very long time.