A local TV news and weather channel’s app on my phone includes other features of interest, one being “This Day In History.” After scanning the headlines about last night’s shootings, car wrecks and warnings about yet another oncoming winter storm to hit the Great Plains, I scrolled down to read that on April 10, 1912, “The Titanic set sail from Southampton, England, on its maiden voyage across the Atlantic Ocean headed for New York City.”

Billed as the ship that “not even God could sink,” after the starboard side of the RMS Titanic struck the iceberg it took only two hours and 40 minutes for her to disappear under the eerily placid waters of the Atlantic about 375 miles south of Newfoundland. The White Star Line’s much acclaimed 46,300-ton truly titanic luxury vessel sank, along with more than 1,500 passengers, 1,200 pudding dishes, 1,000 oyster forks, 400 asparagus tongs and countless other miscellaneous comfort items to the bottom of the sea. 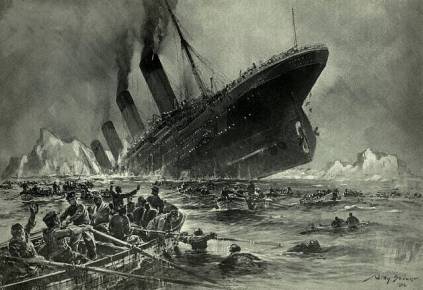 The winter of 1911-1912 had been unusually mild. Higher-than-normal temperatures in the North Atlantic had caused more icebergs to drift away from the west coast of Greenland than at any time in the previous 50 years. If not for that one unseasonably warm winter, perhaps the Titanic might never have had an iceberg to hit.

It has been noted that wireless operators aboard had received warnings from other vessels in the area about large concentrations of icebergs in the area. The fact that the fateful, fatal collision might have been avoided makes the disaster even more tragic.

Billy Graham is quoted as remarking that “The greatest surprise in life to me is the brevity of life.” Surprised would be an understatement in the minds of passengers swallowed up in the frigid waters and those fortunate few clinging to lifeboats that night, never imagining that tomorrow might not come.

Perhaps the adage “Today is the first day of the rest of your life” is a notion we should realize every day, like the Roman poet Horace exclaims, “Carpe diem!” or “seize the day.” The New Testament writer James says, “Why, you do not even know what will happen tomorrow. What is your life? You are a mist that appears for a little while and then vanishes.” Life can be portrayed as brief, no matter how many or how few birthdays we have experienced on this planet. The way we choose to interpret that precious span of days or years makes the biggest difference, especially when trying to understand senseless tragedies, like the sinking of the Titanic.

It seems that we can go either of two ways. We can numb ourselves in guiltless hedonism, if like Shakespeare’s Macbeth, we perceive life as not much more than “a tale told by an idiot, full of sound and fury, signifying nothing.” I prefer instead to believe that I have a purpose, that God values my existence as expressed in the well-known verse of John 3:16, and that both joy and suffering are elemental aspects of my allotted time here on earth. I side then with noted 19th Century Baptist preacher and evangelist Charles Spurgeon who wrote, “Time is short. Eternity is long. It is only reasonable that this short life be lived in the light of eternity.” Well-read in scripture undoubtedly he was familiar with Psalm 90 which says, “So teach us to number our days that we may get a heart of wisdom.” Let us then be wise. Eternity is a long time to be foolish about anything.

4 thoughts on “Remembering The Titanic’s First and Last Voyage”